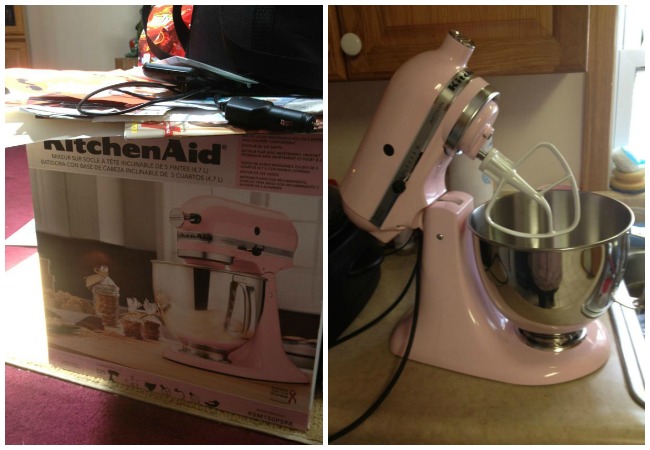 This is a true story as told via Facebook posts, on how my mom’s boob won a pink KitchenAid mixer. Well more like how me talking about  my mom’s boob on Facebook won a pink KitchenAid mixer. My mom is a 14 year breast cancer survivor, she is also the reason for why I am the confident woman I am. However, this story is not just about a boob (well two boobs, we’ll get to that later, but not like you think), it’s about the humor we find in life, even in challenging times, and the outpouring of kindness from strangers.

A little back story. I love to bake. I learned to cook and bake from my mom, my fondest memories are of sitting in the kitchen talking to her as she cooked dinner and showing me her secret techniques to some of the family favorites. A few years ago I mentioned that I wanted a KitchenAid mixer and mom questioned why anyone would need a $300 mixer. However, after spending a week visiting me she saw just how many times I baked in a week and no longer questioned why I wanted one, but she also didn’t offer to buy me a mixer. I bought my first KitchenAid mixer with the Bush tax incentive of 2008, I bought a mixer and got my passport. My first KitchenAid mixer was blue, because blue is my favorite color.
However, I love to shop as much as I love to bake and I love a good deal more than anything. So when I saw that Macy’s had the hot pink Breast Cancer KitchenAid mixer on sale over Veterans’ Day weekend 2011, I just couldn’t resist and I ordered it. I could afford it, after all I was working a lot of overtime at my job. So during a Saturday of overtime at work I was talking to my mom on the phone and I let her know I bought myself a Christmas gift, and my lame BS of a reason, her reaction was unexpected and priceless, and well pure mom.
As with all funny shitmymomsez I posted the conversation on Facebook to entertain my friends.
Post by Sarah Bramblette.
As seen in the comments there was more to the story, as my Mom mentioned she had tried to find my Aunt Kate’s tit. I found this disturbing because my Great Aunt Kate died when I was 10-years-old.

Me: Did she have two?
Mom: No, she only had one, that’s why she had the fake tit.
Me: I KNOW that, I mean did she have TWO FAKE TITS? If not, why the hell wasn’t it buried with her? Why would you have it? And why would you even consider finding it and using it?
Mom: I know I have it somewhere. But I’ll get my own tit after the first of the year when I have flexible spending again.

During the next few weeks, I was passed up for a promotion at my job and other some people online were on a witch hunt for information about me and I changed my Facebook name to Sarah Itchika, because my alter ego is named Bitchika. I also had ordered my boyfriend a pair of shoes from Zappos.com and as any good shopper does I checked for any discounts and I followed their page on Facebook. One day I saw Zappos post a 12 Days of KitchenAid giveaway. The post prompted page fans to enter the giveaway and to leave a comment about what they would do with the mixer if they won. So I entered the contest and quickly commented with a shortened version of conversation with my mom. I realize now I changed “tit” to “boob”. Boob…tit…toe-may-toe…toe-mah-toe. Right?
What happened next was truly a Christmas miracle. Strangers began commenting that they were going to enter the contest but after reading my story they wanted my mom and I to win instead. (the giveaway was random drawing not based on best story). Soon my comment had 200+ “likes” and 61 comments. I was moved by the outpouring of love and kindness from strangers on the internet, when often I experience the very opposite.
Post by Sarah Bramblette.
And then the ultimate THANK YOU BABY JESUS moment…I received a private message from Zappos stating they were so moved by my story that they wanted to send me and my mom a pink KitchenAid mixer. I laughed and cried. I cried because again I couldn’t believe all this was happening from just my simple post. And I laughed because, mom doesn’t bake! And I lived in Miami, Florida and she lived in Ohio. Oh yeah and I already owned two KitchenAid mixers!
Post by Sarah Bramblette.
Post by Zappos.com.
I moved back to Ohio in 2012, and safely delivered the mixer to my mom, as you can see in the picture on the left she used it as a table for her mail. It’s first use was to make her 66th birthday cake!