I am testing out my green thumb. Having lived in Miami the past 8 years, and always lived in an apartment I never attempted to grow my own garden. Now that I live in a more garden friendly climate and own a house I thought I would give it a try. I am starting out small since I am not sure of my cultivating skills. 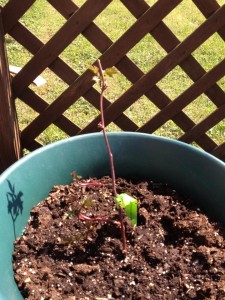 I have a big backyard (yes both my backyards are big), but my attempt to find a good spot for a garden and trying to dig ended with seeing a snake or large lizard so I opted to use containers. I chose blackberries because growing up I know there were blackberry bushes growing in our alley way that had no care whatsoever, so I thought my chances with them were good. The strawberry plant is a complete experiment. The fact that both the strawberry and blackberry plants survived two weeks wrapped in my garage is my first victory of the season. They arrived before I was prepared to plant, I promptly went to the store to purchase containers and soil. I wrestled a giant bag of garden soil into the cart, then I fought to flip it into my trunk without tearing it open and spilling soil every where. Woohoo success it’s in the trunk! Then I see on the back of the bag a huge symbol that says “NOT FOR CONTAINERS” What? Did the cashier not see the containers I was buying? Oh well it wasn’t a garden center. So the planting was postponed until I bought the proper potting soil. 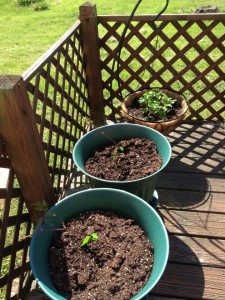 My second success so far is starting my cucumber plants from seeds! I have  NEVER started plants from seeds and was worried because I do not have many sunlight areas inside my house. I put them in the breezeway, but was then concerned the overnight temperature might be too cool. At first, not all the seeds sprouted, but I wasn’t worried because I did not think I needed 32 cucumber plants. So far they are doing great, the next challenge will be to transplant them outside. 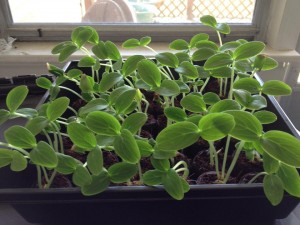 Finally, I am awaiting the arrival of my tomato plants. Nothing says summer like fresh garden tomatoes. I have ordered Heirloom and Mortgage Lifters. I will also plant those in containers.

My plants and seeds were purchased from Gurney’s.