Today my story of living with lymphedema and lipedema airs on The Doctors TV Show. I taped the segment back in September, just days after my 37th birthday. I was suppose to be on a cruise with my sisters, but sharing my story to help spread awareness about lipedema and lymphedema was an awesome way to celebrate! 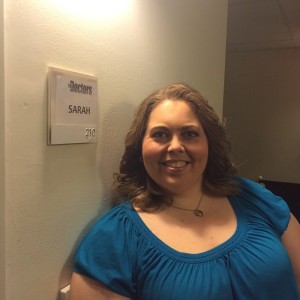 Backstage at The Doctors

I was in the midst of my major advocacy trip in Washington, DC, which was a part of what I deemed the #SummerofSarah, when I was contacted by producers. So it turned into a whirlwind of travel, but worth every moment of the experience. I admit, as with any media opportunity I was on alert for any possible twist or negative spin that might be attempted. I once was not selected for a TV show because I was too happy and confident, usually the media wants to portray fat people as sad and miserable.

However, The Doctors producer had read my blog, so he obviously knew that  my life was not  sad  or miserable, it was actually how I was was living my life despite having a chronic medical issue that caught his attention. The entire staff of The Doctors were so nice, and thanked me for coming on the show to share my story. Of course, I am VERY thankful for The Doctors giving me a national audience in which to share my story.

The actual doctors on the show thanked me as well, and I was impressed by the information they presented and the way my story was told. The segment was short and sweet: like me! It’s odd that I provided them the pictures, I told them my story, and yet I was still moved to tears when they played the video.

My story always makes me cry, I’m crying as I write this, its emotional thinking about how much I have had to fight to be where I am today. No one, especially  those who live with chronic  illnesses, should have to fight so hard against bias and stigma and insurance bureaucracy in order to live. But I fight because I can, I know others are not as strong as I am to stand up to the critics and naysayers.

“I could either get angry or get active, and  I chose to get active and fight for change.” 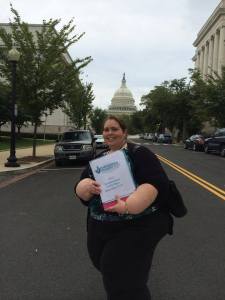 What is my alternative? I have never let others’ opinion of me stop  me from living the life I  want to live, my body provides enough challenges, there is no sense in allowing outside influences to have a negative affect on me.

Living with lymphedema and lipedema is not easy, it’s a painful daily struggle that requires constant management. There are setbacks. I am currently recovering from an infection in my left leg. It’s my life, it’s the only life I know, so I make the best of it and I think those who know me personally would agree I do a pretty good job at living life to the fullest!

Again, I want to thank Nick, Dr. Travis Stork, Dr. Rachael Ross, Dr. Jim Sears, and Dr. Drew Ordon for allowing me to share my story with your audience.