Remember this PSA from the 80s?

The tagline of the commercial came to mind as I read this article about how self hate is passed on to young women by their mothers.

The author, in a form of a letter to her “mum”, describes how she saw her mother as a “beautiful – in every sense of the word” until the day her mother called herself “fat, ugly and horrible”…and it had to be true because “mothers don’t lie”.

Tears streamed down my face as I read the article, and not for myself or for my own daughter (as I have no children), but for the many women I know who struggle with loving and accepting themselves. I was blessed to have a mother who was able to instill in me a very high level of self confidence. This was quite an accomplishment given I was an obese child. I honestly do not know how she did it, nor does she. She even ponders where all my confidence comes from, typically when she questions my decisive life decisions aka when we get in an argument. I’ve actually said to her “I learned this by watching you” or “you created this, you deal with it”. My mom managed to balance making accommodations for me as an obese child while still acknowledging my weight was a problem. Most importantly she never let me use my weight as an excuse, and she fought for what she believed was in my best interest. I took note of that, and that developed the advocate within me.

I am the youngest of five children. My mom, being the good Catholic mother she was, enrolled us all in the local Catholic school system. One problem, at age 5 I was already obese to the point the school uniforms were not available in sizes to fit me. My mother made arrangements for a family friend to make a uniform jumper for me. There was no fuss over this, I remember wearing a plain blue jumper to school until my special jumper was ready. I only recall one classmate asking me why I didn’t have a uniform, and it was a friendly inquiry. The next year when it came time for my First Communion, the same family friend made my dress. It was “Especially Made” for me for a special occasion of course, no fuss or comments about my size. 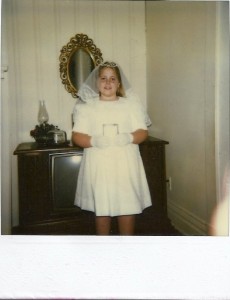 Some people may think that by making such accommodations my mother was enabling my weight problem. I assure you, she was not. This very same year, 2nd grade, was actually when I first learned I was fat. I guess my older siblings telling me I “weighed 100lbs” never sank in as a reality. But then again I was a child, I had no concept of what a normal # weight was and I was active. We didn’t have 24 hour cartoon channels or video games, I rode my bike a lot, I loved recess! The school nurse attempted a weight intervention with me, but she was unsuccessful. Mostly because even though I now knew I was FAT, and I looked different than my peers, my FAT didn’t bother me. The following year my mom signed me up for a 6 week kids weight loss class at the local hospital. I remember the discussion about the choices we make for lunch, and it was assumed was all drank chocolate milk, I think I was the only kid in the course who already drank white milk, who liked vegetables, and who was somewhat active. Years later my mother told me the course instructors told her I’d “always be fat”. I was a bit stunned, but I guess their rationale was the reality, my weight did not bother me enough to change.

My mom still did not waiver, I had to walk to school, I had a paper route, and sometimes she just bluntly told me “you cannot eat the same as your friends”. In middle school my Girl Scout uniform had to be made. In high school my marching band uniform was altered to the point no more changes could be made and I eventually wore an alternate uniform. When I got my first real job, at Taco Bell, again there was not a uniform immediately available in my size so I wore a solid color shirt until a uniform was available. As an adult weighing more than 500lbs, when my best friend asked me to be a bridesmaid in her wedding I did as I knew how to do and had a dress made in the same fabric and color as the other bridesmaids.

My participation in an activity or major life event never hinged on my appearance. My mother saw the importance of my participating in LIFE verses trying to make an issue about my size. After all, the reality is my weight DID indeed keep from many other activities, I would have loved to have participated. Show choir is one that instantly comes to mind, I never even attempted to audition because I knew I could not dance, reality might be I didn’t not sing well enough either. I also never auditioned for the high school musicals, even through I had performed in several children theater plays. I did however, work the front of the house, or backstage for all the musicals. When I got the job at Taco Bell, my mother firmly told me that if I quit the job as might as well not even come home. So despite the difficult time I had being 400lbs and on my feet for 6-8 hour shifts, I worked and I was a good worker.

The point is, already being limited by my weight in many activities my mother made sure I was able to participate in life, the alternative would have been to do nothing? To sit at home and watch TV? If you think telling me I could not do something because I did not have the right outfit was going to motivate to change my appearance, HA! It was just going to motivate me to figure out a way to get it done despite my appearance.

Going back to grade school. Once in my Brownie Girl Scout troop the activity was crab walk. In order to get the in crab position the leader told us to do a back bend until our hands touched the ground behind us. I tried but was unable to do a back bend, the leader quickly told me I’d just have to sit out of the activity. Instead, I got down on the ground and pushed myself up into the crab position. There was more than one way to get to the goal. Tell me it can’t be done, I’ll figure out a way to do it. I am an excellent problem solver, perhaps that’s due to a life time of accommodating my weight, but it’s an excellent skill much needed in today’s society.

It seems I developed a lot of my current “fight” at a young age. It was also during second grade that I saw my mother stand up for what she believed was in my best interest. I had been placed in the lowest reading level group, during class one day the teacher told me to stand up and turn around to read aloud to the class. I did not face the direction she wanted me to face so she grabbed my arm and turned me. She squeezed my arm as she did so, and I began to cry. She immediately made me write a note home to my mother stating I was crying in class. Upon reading my note my mother asked me why I was crying and I told her that the teacher had pinched my arm. My mom wrote a note back to the teacher stating that I had told her the teacher had pinched my arm. The teacher was told me “You write a note back to your mother and tell her you lied to her, your arms are TOO FAT TO PINCH.” So I sat there sobbing writing another note to my mom telling her I lied, yet I was not able to correctly spell the words for the note. Once my mother got the second note, she was more determined to get to the bottom of  not only the incident but why I was in the class and not being taught at the level of my real potential.

But here is the key, she did not storm into the school and raise hell, she followed the procedure, she spoke to the Principal, discussed her concerns with my overall treatment and asked what it would take to get me out of that class. The answer was I had to be tutored over Christmas break so that I could be moved to the intermediate reading class. Now, my mom did not believe I needed tutoring, but she did as requested. After the new year I was in the intermediate class, and I was getting high grades. Actually, at the end of the year I was one of the outstanding scores on the standardized test for second grade. But that was not the end of it, my mother moved me and my two sisters to public schools after that year, and we all flourished in the new environment.

I can tell many stories of my mother taking the same approach and attitude when something needed TO GET DONE. No, she was not an overprotective or “helicopter mom” (that term or idea didn’t exist back then). She just took the reins when needed, sorted out a situation, and got decisions made.

I am proud to say I am a lot like my mother! She taught me the important things in life, appearance should not keep you from enjoying life, and be strong and stand up for what your believe is right.